Global Development Discussion with Sam Nunn alumna Ms. Alexious Butler, USAID Acting Deputy Assistant Administrator in the Bureau for Resilience and Food Security. Join us for this online event about global development and careers on Tuesday, March 1st, from 11:00-11:45.

Registration for this event is required.

To register, click here. Attendees will be provided the BlueJeans link prior to the event. 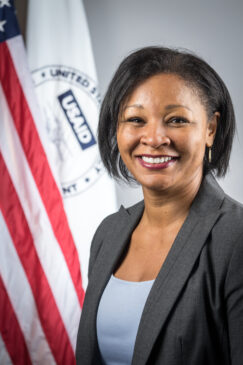 Ms. Alexious Butler is a career senior foreign service officer with the United States Agency for International Development (USAID). Prior to her current detail as Acting Deputy Assistant Administrator in the Bureau for Resilience and Food Security, Ms. Butler served as one of USAID’s Development Diplomats in Residence (DDIR) at Morehouse College from June 2020
through September 2021. In this role, she designed and managed the Agency’s Minority Serving Institutions Partnership and also the Agency’s inaugural Historically Black Colleges and Universities (HBCU) International Development Conference. In 2019, she completed a four-year assignment in the Haiti Mission where she served initially as the Democracy, Rights, and Governance (DRG) Office Chief and then moved into the front office to serve as Deputy Mission Director (DMD). Her DMD portfolio included the Offices of Foreign Disaster Assistance, Economic Growth and Agriculture, Food for Peace, and DRG. Before her Haiti assignments, Ms. Butler served as a DRG Officer in South Sudan, Bangladesh, Iraq, and Afghanistan as well as in Washington DC in the Africa Bureau’s Conflict, Peacebuilding, and Governance section.

Before joining USAID in 2006, Ms. Butler was the Resident Representative for the National Democratic Institute (NDI) in Uganda where she managed women’s political participation, “Parties in Parliament” and electoral observation programs as well as voter education and outreach in northern Uganda. She also worked with NDI in Kenya and Tanzania on political party development. Upon completing her Master’s studies at the Sam Nunn School of International Affairs at Georgia Institute of Technology in 2002, Ms. Butler began working with the Africa Section of the National Endowment for Democracy (NED). At NED, she managed civil society programs in East and southern Africa as well as Nigeria. While in graduate school, she worked at The Carter Center as a graduate assistant and helped to set up the Center’s office in Albania to support the development of that country’s national development plan. She also worked for the Center on conflict resolution in northern Uganda.

A native of Atlanta, GA, Ms. Butler worked in the private sector for almost 10 years as a public
relations specialist for a variety of clients including Bayer Pharmaceuticals, McDonald’s, Nestle,
Coca-Cola, and the World Bank. She earned her Bachelor’s degree in Political Science from
Duke University in 1994. Ms. Butler also holds a Master’s degree in Strategic Studies from the
US Army War College.